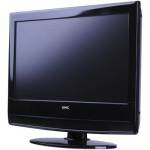 Being the Luddite I am, I have thus far shunned the idea of having a television in my flat. I really couldn't see the point, given that I have plenty of other things to entertain me, and the fact that there is seldom anything on. Anything I do watch I do so on DVD, iPlayer, or *ahem* handy, handy torrents.
However, I do have two children who like to watch the these things, and it is much nicer to watch DVDs on a decent sized screen than on my 13.3" MacBook. I have previously used a projector for such purposes, but it's a faff to set up (don't have anywhere permanent to mount it) and in recent months the picture has turned increasingly yellow.
So, I had a plan. Don't get a telly. Get a decent monitor instead. A nice TFT monitor would let me do all the things I currently do on a much better display. Genius. And that's exactly what I was going to do, until I saw a UMC 21.6" TV in Tesco for very little cash.
I went over to my local Tesco (all of half a mile from the flat) and picked one up last night, and was immediately impressed. Everything just worked out of the box, and it has an impressive array of connectors. There's the usual SCART and component inputs, as well as HDMI for HD content and a VGA connector. This last addition is what swayed me. For £170, I got a 1080p HD television that doubles up as a 1920x1080 monitor for plugging the laptop into.
It's quite an impressive little thing, for the money. The interface is clean, easy to use, easy to read and responds quickly to user inputs. It does everything you could want of a TV, and the built in Freeview tuner picks up a suitable amount of channels. The 1000:1 contrast ratio is very nice, producing a clean, crisp and vivid picture even when using my grotty low-bitrate AVIs I have acquired from the internet.
The only problem, really, is that there's still nothing on!