March 12, 2010
For the last month or so I seem to have become entirely addicted to a iPhone Scrabble clone called Words With Friends. I seem to manage to have 3 games on the go at once and, thanks to the iPhone notifications system, I can have near real-time access to this time sink of an app.

The game allows several modes of play, all of which are based on two players maximum. No mass games here; everything is one on one. You can play both players on the same physical device by passing it back and forth, of course, but there is also an asynchronous networked mode. Play against people you know, or ask the game for a random pairing with a complete stranger. There's always someone to play against. 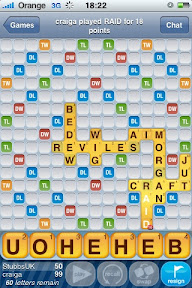 Visually the game is very slick. The board and tiles and rendered very nicely, and the zoom mode to switch between letter placement and a board overview is handy. I wouldn't fancy playing all the time with the tiny overview mode. Dragging the tiles around is also done nicely. Just drag each one with your finger and drop it on the board. It doesn't sound like much, but having played online Scrabble before with some very odd input methods it's a breath of fresh air.

The rules seem a bit ... lax. Plurals are allowed for a start. American or British English spellings. And some randomness, including "adios". All the two letter words are present, of course. Handy for aligning words side by side.

One problem with this sort of Scrabble game is the built in dictionary. It makes it possible to just enter a random jumble of words and hit 'send' to see if it sticks. There's no challenge option so you can't even make your opponent lose out if you think they're making it up. I'm not sure how that could effectively be implemented in an asynchronous game like this, though. Maybe it's better left as is.

So yeah, I've got three games on the go today. One of them is a hand-over game against myself for practice purposes and to hone my skills. I might start a few more ...