October 20, 2010
A while ago I posted a picture of my very first SLR camera, a Zenit-E with Helios-44M 2.0/58mm lens. It's a truly delightful camera, hefty but not heavy, simple yet deceptively complex, and has an air of nostalgia about it. After digging it out and using up the remains of the film that was still in it, I decided to get some new film and take some photos properly.

It being, as I have mentioned before, Autumn, I decided to go out in my local area. There is, of course, the housing estate, but I focussed on the Four Greens, a recreational area of sorts right in the middle of the estate. Using the rather amazing lightmeter (all dials and needles) to figure out what the sun was playing with, I opted for some high ISO (the film I got was 400, so had to) but also high shutter speed (1/500th second) pictures. This would require me to use very low f stops, so giving me a very wide aperture and very shallow depth of field. This should, if my plan worked, give the pictures a dreamy look, the high shutter speed washing out the colours slightly and the wide aperture causing softness around the subject.

Out of a 36 exposure film, I got 16 good exposures. Well, by "good" I mean "not a complete disaster". The first 4 were a washout, literally, because the film got stuck and exposed to light. Some of the others, primarily landscape oriented, were cut in half or faded to black or white at either edge. This was caused by the shutter curtain getting stuck, and only properly firing when the shutter was released. This resulted in lots of irreparable damage to the picture, which is a shame. Of course, some of them were duplicates where I was messing with alternative settings, so 16 isn't too bad, all things considered. 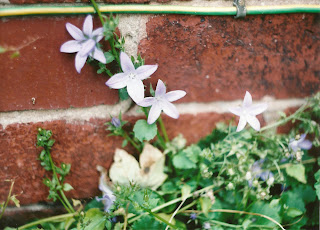 Some may remember these little purple flowers from my picture the other day. This one isn't brilliant, but it definitely demonstrates how hard it is to focus through a viewfinder while trying not to kneel in a puddle. 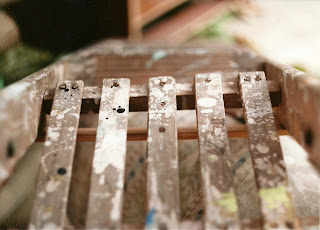 Another recurring theme this week is decorating. My old, decrepit stepladder has finally been put out to pasture, and this is it's final state. Covered in decades of spillage. Nice demonstration of the very shallow DOF of this lovely lens. 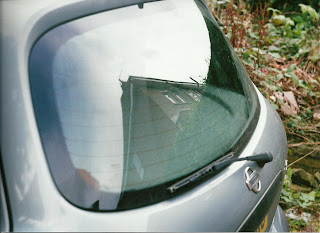 I noticed while wandering around in the back yard how well my car's rear window reflects things. It's like a very large, particularly useless fisheye lens. Again, not a brilliant picture but illustrates the point. 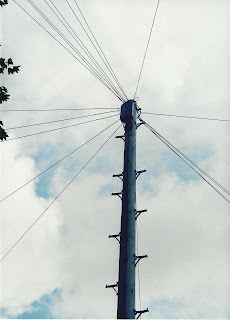 My telegraph pole. Well, not actually mine, but it provides my house with interwebs. Nice blue tint to this picture of what is primarily sky. A few leaves got in, so maybe a crop to take them out, but generally I'm pretty pleased with this. I love diagonal lines. 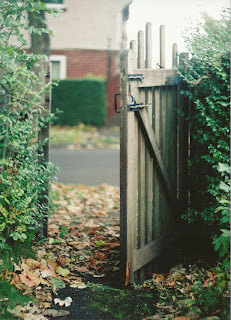 My garden gate. With any of my other lenses, this would have just been a picture of a gate, and not a very good one. The sky is blown out, the DOF would have been far too deep and the colours would have looked ... well, realistic. And on a day like yesterday, that is a horrible dull colour. However, this picture is quite nice. I might describe it as rustic. 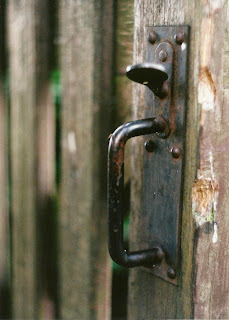 The handle of the gate. Got the focus ever so slightly wrong on this one. The latch should have been sharp, but as it stands the edge of the handle and the screws are sharp instead. This is mainly because at f2.8 the focus can be shifted just by rocking back or forth slightly. It was properly focussed when I pressed the shutter, but even a small tilt backward could have moved it. Still, I like this picture. Like the one before, it's rustic. 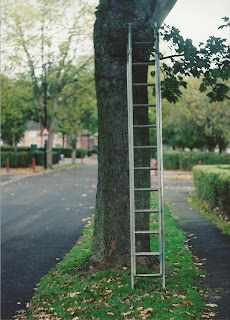 I have no idea whose ladder this is, or why it's leaning against this tree. This picture is, obviously, of the ladder, but I was trying to use the mirrored pavement and road surface to lead the eye up from the bottom to the top of the picture. It worked, after a fashion. 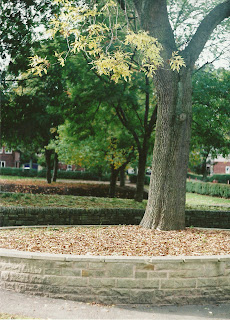 I ummed and ahhed about whether this one should have been landscape orientation so it fully contained the circular base the tree is on. I decided in the end that no, it is fine as it is. the base, trunk and leaves nicely frame the hint of wooded area behind and the detail in the leaves and trunk are worth the cropped bottom. 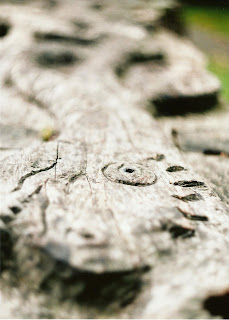 Aah! A dragon! This is a carving in a bench made from an old tree stump. I did take a picture of the bench, but the shutter stuck and ruined it. The eye is about 1.5" across, so it gives you an idea of how much a little swaying can throw off the focus. 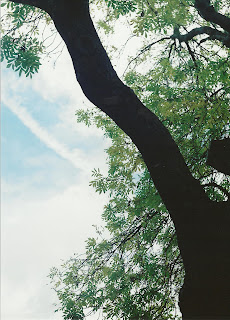 Sky through the trees. Cliché? Maybe. But I don't care. I like the colours in this picture, and the diagonal trunk gives it a little something of interest. 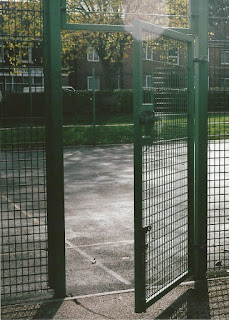 The gate to the basketball court. The sun was so low in the sky that I've ended up with lens flare. All things considered, I should have taken a picture of the shadow I was standing on, a hint of which you can see at the bottom of the picture. It would have been far more interesting. 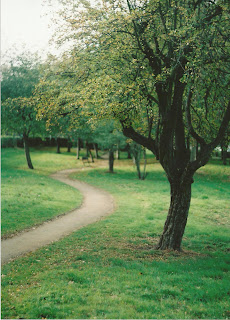 Nice little country path. I liked this one because, from my vantage point, the curve of the path matches the curve of the trunk and branches of the foremost tree. The colours and DOF, too, lend a wistful air the picture, and it reminds me of cold mornings walking through the woods. 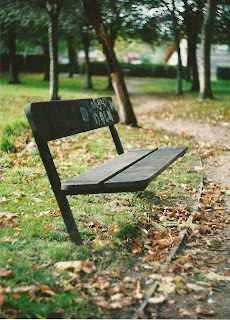 A bench, sadly graffitied. Notice the almost dizzying blur at the top. I don't know how or why but there are a couple of pictures with almost radial blur at the extremes of the image. I like it. 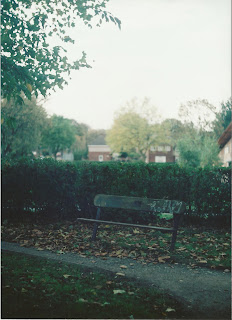 Rubbish picture, but I included it anyway because, technically, it wasn't completely ruined by camera malfunction. Underexposed, very cold colours, and blown out sky. Never mind. 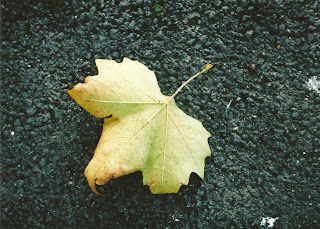 A leaf! Note that these pictures are scanned and uploaded. No processing, editing or cropping has taken place. This leaf, therefore, is a little off centre. But look at the details. 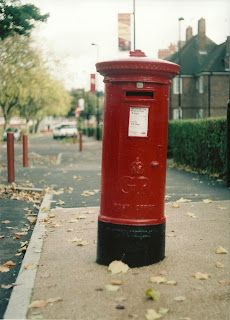 My local post box. Yes, it is leaning. But note that the bollards and lamp posts aren't. It's been set at an angle and I found it amusing. The scattering of leaves adds detail around the base.

So there you have it. One roll of film from my lovely, ancient, sticky-shuttered camera. I've since found a M44 to Nikon AF adapter so I can use the Helios lens on my Fuji S1 Pro. Let's see what I can make it do when I have the benefits of digital review to assist me!