Out With The Old

September 03, 2010
Today I have been a little nostalgic. While cleaning up last weekend I unearthed my first ever SLR. This is the camera I cut my teeth on, so to speak, learning about metering, ISO, shutter speed and the like. It's a 35mm Zenit E, made in the USSR some time in the late 60s or early 70s. Of course, I wasn't around back then, and I'm sure this camera has seen a lot of exciting things in its long life. 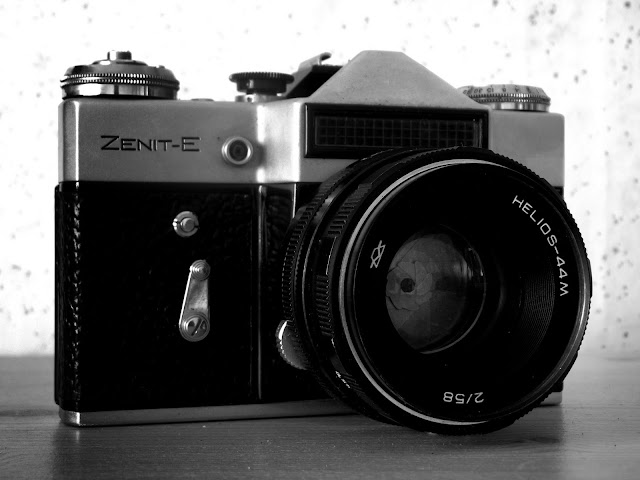 It still functions well enough. Could probably do with a clean, but everything still moves, clunks and clicks like it should. It's actually quite a nice little thing. Entirely mechanical, of course, so no automatic anything. Everything from metering, film speed, shutter speed and remaining exposures are accessed via a selection of knobs and dials on the top, each of which manipulate one small spring or another. There's also some niceties, including a mechanical self-timer and a little plug for the flash, triggered by a piezoelectric discharge. No hot-shoe here.

The lens is actually quite nice. It's a Helios 44M 2/58 lens with an aperture range of f2 to f16. The 58mm fixed focal length is more than capable in most situations, although perhaps a tad too far on the telephoto side for photographs taken at close quarters. My 16' living room, for example, is not small enough for the lens to capture more than perhaps 1/8th of it. People seem to always be looming ominously close because it's not possible to get far enough away from them. Ideal for outdoor events, though.

Here is another picture of it to demonstrate the controls layout. 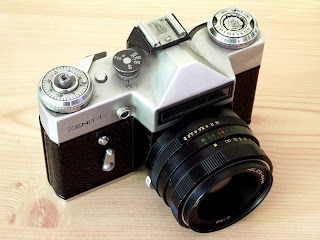 From left to right, we have the remaining exposures dial with shutter release and wind-on lever, then the film advance control that I put to good use making "ghostly" photos in the lounge. Next up is the shutter speed selector, going from 1/500th to 1/30th of a second (marked as the flash sync speed). The B option allows the shutter to remain open as long as the photographer likes, which can make for fun times trying to photograph swirling stars and other astronomical phenomena.

On the other side of the flash-shoe there is the metering control with a pop-up film rewind knob. This lets you select film speed (in ASA only) and then has a tiny moving needle, indicating the light reading from the large light sensor above the lens, that can be twiddled around to line up with a handy little circular target. Once that's all done, of course, you have to then manually set the lens to match the settings. Oh how spoiled we are, when all of that is done in the time it takes the autofocus to figure out what we're pointing the camera at. And no, it doesn't do autofocus.

Finally, here are a couple of pictures from the last roll of film I shot using this camera in 2003. Notice the incredibly high contrast and saturation of the images. I've left them as-is rather than trying to fix them because, like the LOMO effect so popular today, it's nice to remember both the occasion of the photo, and the camera used to capture it.