Gaming on the cheap 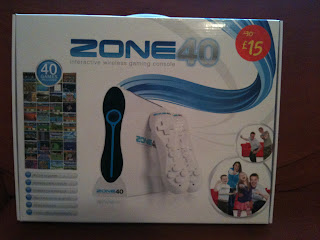 I would like to buy a Wii. I cannot afford a Wii. But, for a mere 1/10th the price, I can afford a Zone40 Interactive Wireless Gaming Console. A snip at £15, what could possibly go wrong?

Let's take it out of the box and have a look, shall we? What do we get included. The console, of course. 2 controllers, and an A/V lead. Oh, and the instructions. What more do you need?

You may notice that it bears more than a passing resemblance to a sort of slightly rounded Wii, even down to the slight angle of the base stand. There's even a cute blue sticker resembling a CD slot. How quaint!

The built quality is as bad as can be expected. The back of one of the controllers fell off almost immediately but I stuck it back. I don't think it'll fall apart too badly, but it lacks the sturdy construction of, well, anything.

There's a lovely bit inside the cover of the instructions that reads as follows:

"NOTE: If you are looking to purchase or own an XBOX, PlayStation, Nintendo Wii or equivalent, this product does not compare or compete with these technologies. Zone40 is a family entertainment game for ages 5 and up."
So that tells you what you're not getting, anyway. 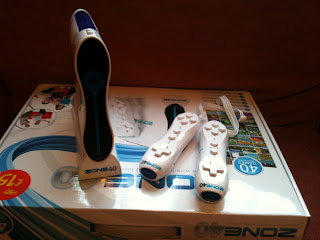 The instructions are pretty simplistic, limited to "how to insert the batteries" and a brief run-down of the controls of each game.

The controls seem to be pretty limited. Half the games involve just wafting the controller aimlessly at the right time, and the other half don't even use the motion detection at all and work like standard 2 button NES controllers.

Not a problem, though. Let's play a wireless motion detected game! 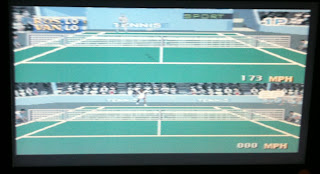 Ah, tennis. Mainstay of the interactive wireless gaming market. As you can see, it bears an uncanny resemblance to an arcade machine circa 1992. The controls are pretty much as expected for the money. None of your fancy accurate motion detection here! Just vaguely waft the control when the ball gets somewhere near you and you'll be all right. To put spin on the ball, you have to press a button while hitting it. In fact, in most cases, the act of wafting the controller could easily be replaced by pressing a button at the right moment. 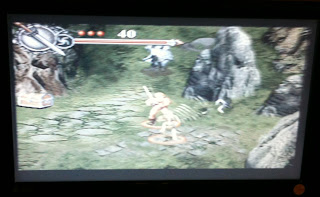 How about those standard arcade style games? Well, much of the same really. A definite 1992 arcade feel to them. This one on the left here, Sword Of Warrior, resembles a vertically scrolling Golden Axe.

Honestly, having played some of my old Megadrive games recently, the depth of play here is no worse than it ever was. Golden Axe was pretty much the same thing for 2 hours, then you finished.

Most of the games are alright, to varying degrees. Some are completely terrible, some are pretty good fun. None of them show much flair in the naming department. Some of the "arcade" style games appear to have come from a pre-Mastersystem era, with slow, awful graphics and basically no game play. The sports games also have their share of howlers. The bowling and darts games, for example, which take so long to watch the tedious animations that I didn't finish 2 frames before going back to Sword Of Warrior.

It's amusing enough for a while, anyway. The kids like it, and have been playing it for some hours. The instructions are even translated into real English. I was amazed! Well, all but one game. This game seems to have had a rather clumsy translation early on and it's perpetuated right through from development, through graphics and into the manual. The name of the game is ... Edacity Snakes! 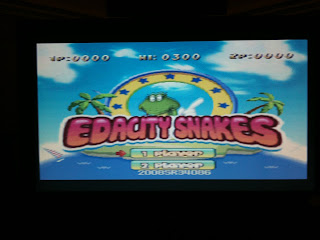 Yep, edacity snakes. It's one of those words that, well, nobody ever uses. I think they were going for Greedy Snakes.