August 17, 2010
Last night's entertainment was a heavy trio of metal bands, Nottingham's Merciless Terror, Sheffield's own Opinicus, and Norwegian metalcore band Purified In Blood. We first got wind of the gig through Plusnet, where both I and two members of Opinicus were working at the time. 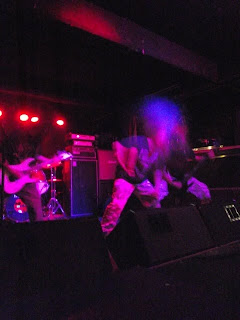 It was tough going, photography-wise. There were a few other people with bigger, fancier cameras than mine who were having equal trouble with the almost non-existent lighting. Even at ISO 1600 or higher it was still taking a half second or so to expose, which is no good when the band is thrashing about like lunatics. For instance, the picture on the right here is Dale Linsdell of Merciless Terror mid-windmill.

Fortunately the lighting improved somewhat for Purified In Blood, but not greatly. I will still shooting at a range of ISO settings from 400 to 6400. At the 6400 end the image was so grainy as to be unusable, so I stepped down to 800 and 1600 just to try and make the best of it.

So really it was all down to timing. I was destined to have a dangerously slow shutter speed no matter what I tweaked, so it was just a case of waiting for ideal lighting. On very few occassions, it actually happened. Today's picture of the day is Glenn Cato Rasmussen of Purified In Blood in full swing. 1/4 second exposure at f4.4, approx. 35mm focal length (35mm equiv. Actual 14.7mm with 1/2.3" sensor). 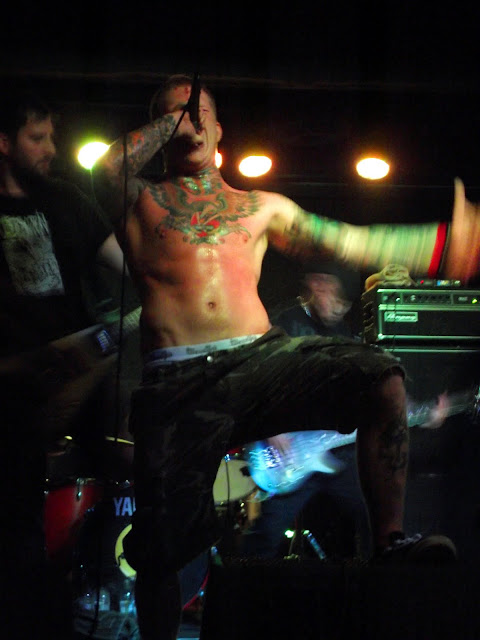