August 30, 2010
A common theme for wall-hanging pictures is triptych, or three related pictures that fit together to make a single piece of art. The most common way to do this in photography is to simply take a panoramic shot and split it into three parts. Another way is to take three pictures on a common theme. I've taken a mixture of the two techniques.

Today's picture is taken from the road above High Bradfield. I took three pictures from the same spot, but each framed to have a single subject in each picture. The weather was against me, sadly. If I'd gone out an hour earlier or an hour later the sun would have come out from behind the clouds and lit up the valley. At the only time I had available, it was grim and overcast. I've tried to make the best of it, though, and tried to capture three aspects of the village. 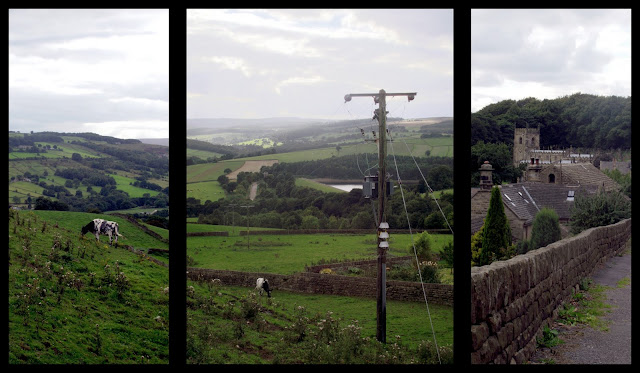 Just for giggles, I've also taken one in the "traditional" style using the panorama mode on my camera. It's nice enough, but it's a shame that I managed to include a telegraph pole in the final shot. Maybe moving 6 feet down the road would have improved it, but on the other hand it adds something to the image that could have just come out as a fairly wide angle view of a few buildings with no particular foreground focus. It works, anyway.