September 24, 2010
Since iOS 4.1, the iPhone 4 has been able to do HDR, or High Dynamic Range, photography. This means that it can capture a much wider range of brightnesses than other cameras by combining multiple exposures into a single one. For example, one picture with a perfectly exposed sky combined with an identical picture that's exposed for the ground makes a single picture that contains both sets of details.

Sounds like a good idea, and in theory it is. Even in practice, it is often great. Putting that blown out sky back in, or capturing detail in a brightly back-lit window when flash just isn't enough. But sometimes it's just generally awful. Search Google Images for "bad HDR" and have a look at the examples.

The old fashioned way of increasing dynamic range is simply to introduce a different exposure, and mask out the parts that you don't want replaced. In the ideal case, a flat horizon with sky above and ground below, a ND gradient filter on the camera lens, or a simple gradient filter in post-processing, will do the trick. Very much like this picture of a field I took a while ago, in fact.

The new way is something called "tone mapping" and involves averaging the tones of multiple exposures over the whole image. This results in pictures where none of the pixels are natural; they are all the result of post-processing.

And so to the point of this post; HDR on the iPhone. Sadly I don't have an iPhone 4, but I do have a copy of Pro HDR for iPhone 3GS. Its purpose is simple. Allow you to take two identical pictures, exposed for two different parts of the scene, and combine the two. Like this: 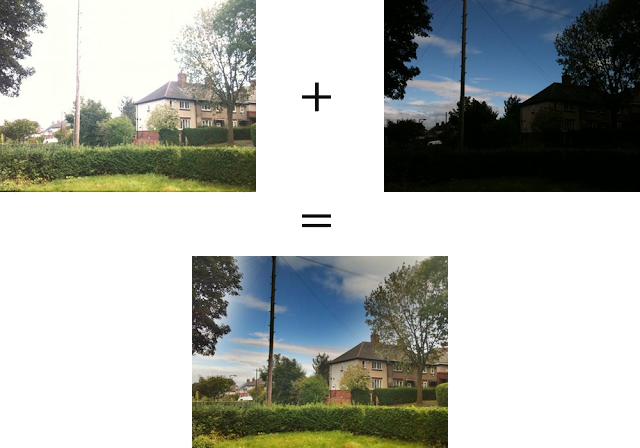 It's simple enough in practice, and the software can even pick the brightest/darkest areas and align your pictures (if your hands wobble) before making the final image. Doesn't look too bad, eh? There is some light halo effect around the leaves caused by them moving around in the wind in between the two pictures, but it mostly seems to have worked.

To do a proper comparison, I broke out the tripod and did it "properly" using a real camera. I took  2 exposures at f/6, at 1/1200 and 1/200 seconds respectively and put them together in The Gimp, ensuring that each exposure retained the important elements. I came up with this: 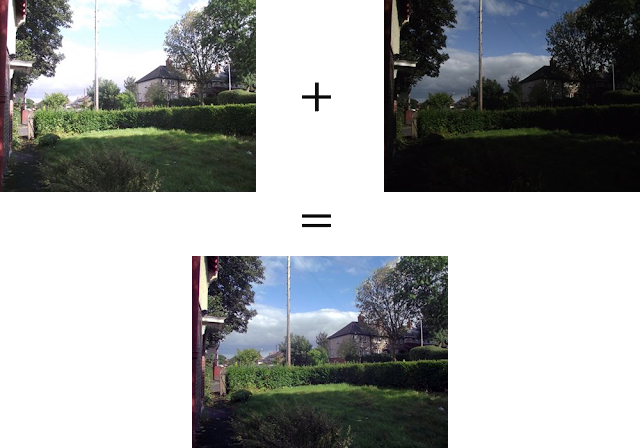 Doesn't look nearly as exciting, but it does look more realistic and natural. The iPhone's picture is clearly artificially oversaturated and, compared to the more pedestrian version taken with a camera and tripod, it looks pretty unrealistic.

Putting the two side by side emphasises the effect. The HDR image from the iPhone starts to resemble a painting rather than a photograph. This is especially evident in these cropped pictures of the hedge. 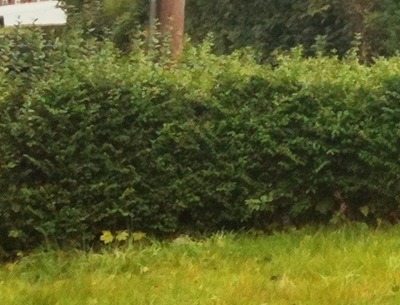 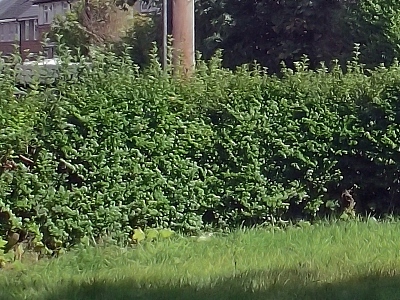 But what is the conclusion? That a properly taken image, processed to include the highlights of multiple exposures, is better than a quicky app on the iPhone? I think that much is pretty self-evident. But what you do gain on the iPhone app is very simple; speed.

Setting up the tripod, calculating the optimum exposures and taken them is the first issue with multiple exposures using a traditional camera. Aligning and processing them in post-processing is the second. All of this takes time and effort.  It took me approximately 10 seconds to take the picture on the iPhone. Taking and compositing the picture with the camera took closer to 20 minutes. That's a 12000% saving on time. And of course, I don't have to cart the tripod around for the iPhone.

So can I live with the results? Probably. HDR in post-processing using the iPhone is practically impossible because aligning the images is just too much hassle. Having the software take the two images rapidly then automatically align them takes all that had work out straight away. So if I don't have my normal camera with me, or if I want to snap a picture but don't want to spend the evening actually (hopefully) making it contain everything I want, then it's ideal and well worth £1.19.